The FPR was founded in December 1999 with a gift from Robert Lemelson, PhD, a psychological anthropologist and documentary filmmaker, to support and advance interdisciplinary research bridging anthropology, psychology, psychiatry, and the neurosciences. A graduate of Hampshire College, Dr. Lemelson received his MA in anthropology from the University of Chicago with additional training in clinical psychology and his PhD from the University of California, Los Angeles (UCLA). His area of interest is Southeast Asian studies, psychological and visual anthropology, and transcultural psychiatry.

Dr. Lemelson is an adjunct professor of anthropology in the Department of Anthropology and a research anthropologist in the Semel Institute for Neuroscience and Human Behavior at UCLA. He is also an adjunct lecturer in the Department of Anthropology at the University of Southern California. A former Fulbright scholar, he has been conducting psychological and visual anthropological research in Indonesia, on the islands of Bali and Java, yearly for the past 20 years. His work has appeared in such journals as Culture, Medicine and Psychiatry, Ethos, Medical Anthropology Quarterly, and Transcultural Psychiatry. He is also the co-editor of three volumes with Cambridge University Press: Understanding Trauma: Integrating Biological, Clinical, and Cultural Perspectives (Kirmayer, Lemelson, & Barad, 2007), Re-Visioning Psychiatry: Cultural Phenomenology, Critical Neuroscience, and Global Mental Health (Kirmayer, Lemelson, & Cummings, 2015), and Culture, Mind, Brain: Emerging Concepts, Models, Applications (Kirmayer, Worthman, Kitayama, Lemelson, & Cummings, 2020).

In 2007 he founded Elemental Productions, an ethnographic documentary film production company. He has produced and directed over a dozen ethnographic films on subjects ranging from genocide, the sex trade, mental illness, kinship, ritual and related topics. Dr. Lemelson and colleagues frequently blog about their experiences making films at psychoculturalcinema.com. His ethnographic work has culminated in a book that Dr. Lemelson co-authored with Dr. Anne Tucker, Afflictions: Steps Toward a Visual Psychological Anthropology (2017), published by Palgrave Macmillan.

Dr. Lemelson was the 2017 recipient of the Creative Scholarship Award from the Society for the Study of Psychiatry and Culture for his significant creative contribution to the field of cultural psychiatry. The award was presented at SSPC’s annual meeting, held on April 27-29.

Dr. Lemelson serves as a director, vice president, and secretary of the Lemelson Foundation, a family foundation whose mission is to promote innovation and invention in American society and the developing world. He is also the founding director of the Robert Lemelson Foundation, which was established in 2010 to promote global mental health and well-being. Additionally, he supports the Indonesian Studies Program and the Lemelson Anthropological Honors Program at UCLA, as well as the Lemelson/Society for Psychological Anthropology Student Fellowship Program.

A book celebration with Dr. Robert Lemelson for his new book, Widening the Frame with Visual Psychological Anthropology: Perspectives on Trauma, Gendered Violence, and Stigma in Indonesia. 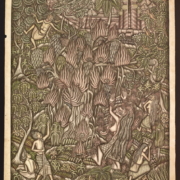 This exhibition centers on paintings collected in Bali by cultural anthropologists Gregory Bateson (1904-1980) and Margaret Mead (1901-1978) during their fieldwork on the island from 1936 until 1939. Utilizing the paintings as a foundation for exploring the stories, beliefs, and daily lives of Balinese people, Bali: Agency and Power in Southeast Asia will guide visitors to a greater understanding of this often romanticized but frequently misunderstood island and examine the role that painters, tourists, and anthropologists had in shaping new art styles for communicating detailed aspects of Balinese society and beliefs.